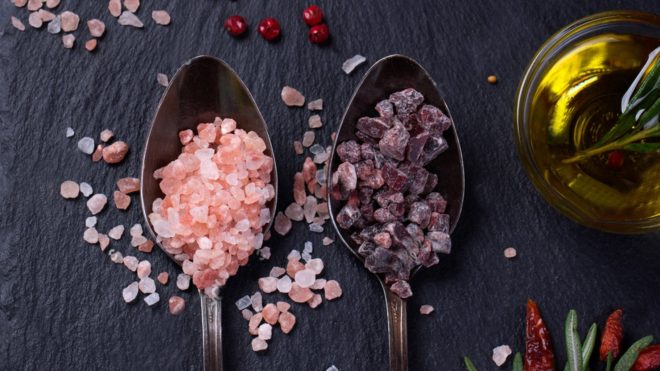 The simplest definition of salt is naturally occurring crystalline compound, NaCl, sodium chloride existing as a mineral and important constituent of seawater. Salt is used for seasoning food and also as a preservative. Studies show that there are around 1400 uses of salt.

Too much salt can cause high blood pressure, kidney stones, and cardiovascular diseases. Too little can result in symptoms of dizziness, muscle twitches, seizures, and hypothermia.

Generally speaking, salt can be divided into two categories; naturally occurring and man-made. The naturally occurring salts are extracted from the seawater or salt mines. The ones that are man-made are obtained by neutralization; a chemical reaction between acids and bases that result in salt and water.

This piece will focus on naturally occurring salts. It is amazing to know that there are so many types of salts:

Harvested by evaporating seawater. Its composition depends upon the water of the sea it has been extracted from.

Also called sel gris; grey salt in French. It is extracted from the bottom of the tidal ponds off the coasts of France.

5) Fluer de sel: It is known as the flower of salt, this is the most expensive salt and has a unique blue-grey tint. It is extracted from the surface of the tidal pools of Brittany, France. The salt grains are delicate and flaky.

Harvested through evaporation of seawater, this salt has a bright salty flavor, flaky grains, and low mineral content.

This salt is extracted from the volcanic islands of Hawaii. It has a deep black color which is obtained by mixing activated charcoal in it.

It is also called alaea salt. It is harvested from the iron-rich, reddish, volcanic alae clay.

Slow-smoked over a wood fire for up to two weeks, this salt gives a smoky dimension to the dishes when added. The smoky flavor depends upon the salt used and the wood it has been smoked at.

Since everyone around the world is adopting ways to eat healthily, Himalayan salt is becoming the top pick as a food additive. There is no denying the fact that pink Himalayan salt is full of health benefits and this is the very reason a larger number of people are replacing it with table salt.

This salt is a result of mass evaporation of seawater which was landlocked by mountains due to tectonic shifts of plates millions of years ago. This salt has since been protected by the layers of mountains and is known to be the purest salt on planet Earth.

Enough of the pink talk, let us discuss another salt that is widely used in vegan recipes. It is the black salt often referred to as the Indian black salt or ‘Kala Namak’ locally.

This salt has a reddish-black color, salty taste with a hint of pungency and a faint, sulfurous aroma of eggs.

"For Ordering Black Salt In Bulk"

Let us talk about the Pink salt and the Black salt in a little more detail.

Difference Between The Pink Himalayan Salt And The Black Salt

The pink Himalayan salt, as the name suggests, occurs in the shades of pink and subtle hues of orange. In very rare cases, this salt also comes in white color.

As mentioned above, the Himalayan salt is extracted from the Khewra salt mines, therefore the salt originally comes in big chunks. These huge chunks are then cut and given desired shapes and sizes. For use in the kitchen, this salt is ground into coarse grains.

The black salt doesn’t occur naturally. It is obtained after heating and mixing charcoal, herbs, and spices with the Himalayan salt.

The black salt is not always black. It is reddish-brown or purple in color. The black color is attained by mixing activated charcoal in it.

Since this salt is majorly used in cooking, the process is carried out with the grains of Himalayan salt. This makes the blending of other ingredients easier and results in a homogeneous blend of salt.

The pink Himalayan salt is the purest salt on this planet. It contains as many as 84 trace minerals which are extremely important and beneficial for the functioning of our bodies. This is what makes this salt a common favorite of masses around the world.

On the other hand, the black salt composition is similar to the pink salt as it is obtained after processing the Himalayan salt.

It is quite possible that during the prolonged high heating process, many of the trace minerals naturally present in the Himalayan salt are lost.

Himalayan rock salt exists in its purest and natural form and this has been proven after prolonged studies and researches.

A caveat about black salt is that it is not always made from natural salt. The commercially available salt is often man-made through neutralization and then processed to obtain the black salt.

Another caveat states that the market is full of Mediterranean salt mixed with activated charcoal to give it a look similar to that of the black salt.

This information has resulted because of a case ruling regarding the tax that should be charged on the black salt that is not made from natural salt.

The pink Himalayan salt is almost odorless. It is less salty in taste as compared to other salts available commercially. This is probably because of the low sodium content and the presence of many trace minerals.

The black salt is processed to achieve a flavorful salt which is widely used as a condiment. It tastes like the spices and herbs added to it and smells like hard-boiled eggs.

This flavor and smell result because of the intense heat which chemically changes a substance. The egg flavor makes this salt a favorable condiment in vegan dishes that cannot use real eggs.

Uses And Benefits Of The Pink Salt

The pink Himalayan salt is a miracle salt with a wide variety of uses. Pink salt benefits make it so good for consumption.

Uses And Benefits Of The Black Salt

The black salt or Kala Namak is widely used in Indian and Southeast Asian cuisines. Black salt nutrition and its benefits make it an important part of Indian cuisine and Ayurveda.

Pink salt and black salt are equally useful and beneficial. It is on everyone’s personal preference that which salt they adopt in daily life.