Himalayan Rock Salt Crystals: Why Are They Pink? 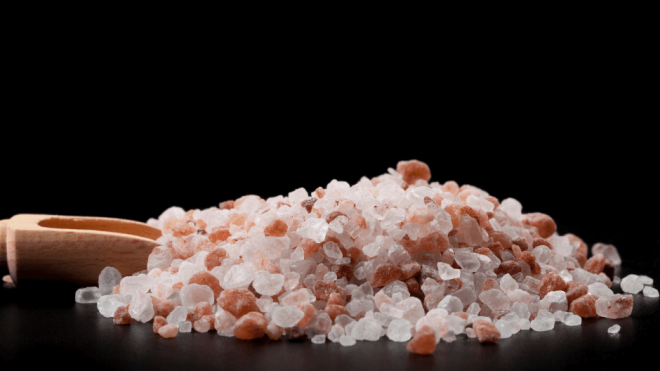 The soft rose pink hue of Himalayan rock salt makes it more noticeable and desirable at the same time. Those shiny little crystals look quite mesmerizing and the gorgeous pink color just adds to their natural beauty.

Whenever you see this salt you may wonder about its origin or the reason behind its beautiful pink color. Himalayan salt is usually seen in small bottles stacked up on the shelves of grocery stores or in jars placed in the cabinets of our kitchens.

Well, that’s just about the crystalline Himalayan salt that exists in the form of small crystals. But what about the products that are made from this salt? Do they also have a pink color? If yes, then why so? Let us find answers to all of these questions for you.

However, for those who do not know much about Himalayan salt, let us first have a quick introduction and then we will move forward to the point of interest here – what is rock salt made of and why is it pink?

Often given to others as a gift or usually found stacked up in grocery stores, or spas, the Himalayan salt is an excellent edible salt and bath salt known to have a wide variety of therapeutic and health benefits.

Not only it is used to give a beautiful presentation and taste to different cuisines, but it also has a wide range of other benefits as well.

The name of this rock salt clearly explains the place of its origins which is none other than the renowned khewra salt mines at the foothills of the Himalayan Mountains. This salt is carefully mined and extracted from these mines in large amounts which are then distributed all over the world.

Amazing health and beauty products are made from this rock salt i.e. face and body scrubs, bath salts, toners, and sole water. Himalayan salt lamps are quite famous as well and are not only a source of light but also give therapeutic benefits to their users.

The color and composition of this rock salt depend on its origin as well. To find an answer to why Himalayan salt has a pink color, we must have sound knowledge about its origin.

It is well believed that some 800 million years ago a salt bed was formed due to the evaporation of a huge ocean. The salt bed was then compressed by tectonic and environmental processes and covered by lava at the foothills of one of the highest and most famous mountain ranges of the world known as the Himalayan Range.

Although the salt bed has been there for centuries, the lava that surrounds it has made it quite difficult for other environmental pollutants to get in there and affect its purity.

The vast salt deposits are crushed and broken down into very small pieces to get the crystalline version of rock salt. This whole process is solely mechanical and laborers work by hand to obtain a pure version of Himalayan rock salt crystals.

Himalayan rock salt is often considered to be pure and free from any sort of processing. This is why it is most commonly used as the main ingredient in health and beauty products.

However, very few people know that the basic reason behind the pink color of this salt is the presence of certain minerals in it. So, let us have a detailed overview of that and see for ourselves why Himalayan pink salt from Pakistan is pink.

Why Is Himalayan Salt pink?

There are a lot of minerals in Himalayan salt. The normal table salt which we use in our daily lives is made up of sodium chloride.

However, the Himalayan salt also has sodium and chloride as the main components, but along with that, it has eighty-four trace minerals that are the building blocks of this salt. So, if you are wondering what mineral is the major component of rock salt? Then you have your answer now.

The Himalayan rock salt has a major percentage of sodium chloride in it but it also has some other minerals in it which are responsible for its pink color. Some of these minerals are iron, zinc, manganese, and potassium, however, others are elements like oxygen, potassium, magnesium, calcium, and hydrogen.

Therefore, the Himalayan salt has more minerals in it than any other type of salt. Especially the presence of traces of iron oxide gives this salt pink color. This pink color makes this salt unique and recognizable.

Himalayan pink salt has a wide range of uses and one of them is to give a nice color and flavor to food. It is believed that the pink color of the Himalayan pink salt imparts certain properties to it which make it much better than the regular table salt. However, there is no scientific theory that supports this argument. Many people use this marketing strategy to promote their rock salt products.

There is no doubt that these products are beneficial for health but it is not because of the pink hue of this rock salt but due to the minerals that cause this pink color.

Some of the most common Himalayan pink salt products are edible salt, bath salt, and animal lick salt which are made of rock salt crystals. Himalayan bath salt is widely known to rejuvenate skin and make it look healthier than ever. Lick salt is very much popular among farm owners for their animals.

Other very common salt products are the Himalayan rock salt candle holder and salt lamps which have therapeutic properties and serve as excellent illuminators as well.

Rock salt is a fascinating product of nature that comes with an ethereal pink hue due to its mineral components and has a vast range of uses in our everyday lives as well.