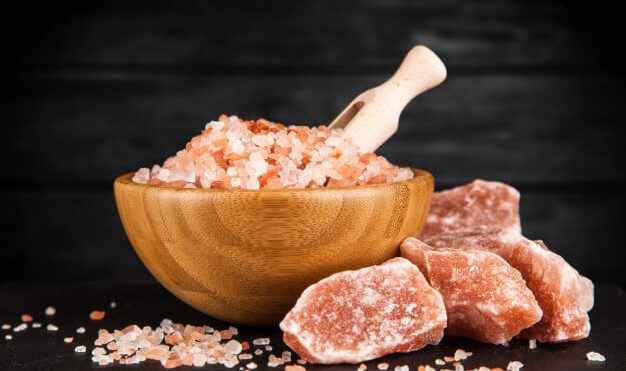 Salt is not only an essential ingredient for seasoning food, but also plays a vital role in maintaining many bodily functions. It’s best to be aware of the salt you use every day for cooking. One type of salt that is trending right now is rock salt . . It is said to be the purest form of salt. This salt is widely used in the gourmet food industry because of its beautiful, unrefined, chemical-free, pink-colored crystals. In this article, we will go into detail about rock salt so that you can choose the best salt for your daily use.

Rock salt is basically halite or sodium chloride. It formed over time due to the evaporation of large oceans. It is one of the least processed types of salt available on the market.

It is mined by hand from underground salt deposits formed 200-250 million years ago by the evaporation of water. It now exists in the form of the Khewra Salt Mines which are the second largest salt mines in the world. That is why this salt has its significance.

It is best known as Himalayan Pink Salt due to its unique color that ranges from light pink to deep pink to pinkish white.

What mineral is the main component of rock salt?

Its chemical properties are the same as table salt. The main component of Himalayan rock salt is sodium chloride, the content of which reaches 98 percent. The rest of the salt consists of trace elements such as potassium, magnesium and calcium. The minerals in Himalayan salt give it a pink hue that sets it apart from other salts.

Rock salt and table salt have the same chemical composition, but there are many differences between the two salts based on their source, color, processing, and nutritional value.

Himalayan salt is extracted from salt mines located in Pakistan. Table salt is made from evaporated sea water, so it contains contaminants and needs to be cleaned.

Table salt is 99% NaCl, but pink salt is 98% NaCl, the other 2% is made up of over 80 trace elements and elements. These minerals include iron, calcium, potassium, sodium, zinc and many more.

Due to the presence of various minerals , pink salt may taste slightly different from table salt, which is refined and contains additives.

Table salt has a pure white color due to the bleaching and processing it goes through. Whereas, Himalayan salt has a pink tint due to the trace elements it contains. This pink color distinguishes it from table salt.

It is safe from contaminants and does not require bleaching, leaving its natural color and mineral content intact. But table salt is processed and bleached, which removes contaminants along with minerals.

Himalayan salt has pink crystals . which can be translated into various forms as required. It is not subjected to harsh cleaning, so that its beautiful crystal structure remains unchanged. Table salt has a fine to coarse texture.

Any kind of salt that is the least processed and refined is the best to consume. Himalayan pink salt is the best choice for many reasons. First, the source of origin makes this salt safe from environmental contaminants, which means it does not require bleaching like table salt, as mentioned above.

It is available for use in its raw, natural form without any additives or chemicals. This mineral-rich salt is very beneficial for health . It can be used to meet the body’s need for minerals and to maintain electrolyte balance.

It also helps in maintaining the pH level of the body. Unlike table salt, it can be used for a wide variety of purposes, as listed below.

Rock salt or pink Himalayan salt is used in cooking and Ayurveda for its many benefits . . There are many Himalayan salt products that are made entirely from Himalayan rock salt crystals. These products range from beautiful salt lamps, candle holders, cooking salt blocks, salt inhalers and bath salts .

When used in cooking, it gives the food a beautiful color and flavor. Pink Himalayan salt in the bath cleanses the skin and improves its texture.

Not just for humans, this salt has amazing benefits for animals too. Himalayan salt in the form of salt marshes can have various benefits for farm animals. These mineral-rich salt licks can be used to satisfy your pet’s salt cravings. These slimes also provide them with essential minerals that help improve their digestive system.

Each salt has its own specific properties regardless of the same chemical composition. Pink salt, being the purest salt, is the best choice for culinary and other uses. Its mineral-rich nature and health benefits make it a great alternative to table salt. That is why this salt is becoming very popular every day in the gourmet food industry and in the skin care industry.