What Is The Difference Between Epsom Salt And Himalayan Salt? 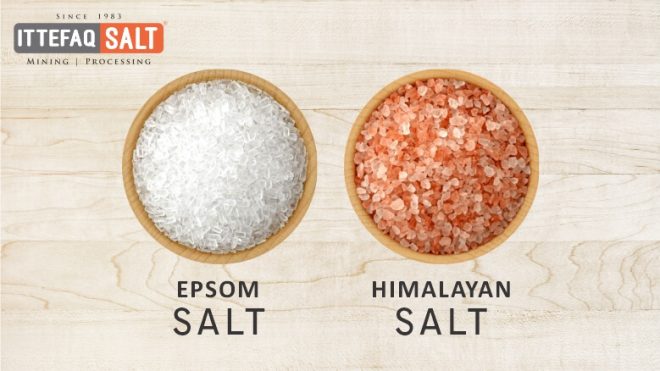 Lately salt has become a topic of discussion because of its various uses and benefits that people are getting aware of with every passing day. Salt is indeed an important part of our daily diet. The availability of different kinds of salts has made it easy to choose the best salt for consumption. But that may also raise a lot of questions in your mind about different salts. A lot of people ask about the Himalayan salt and Epsom salt and their uses and benefits.

To know the difference between Epsom salt and Himalayan salt, it is necessary to know their origin. You will be amazed to know that Epsom salt is not salt, but a mineral. It has high levels of magnesium and sulfate. Besides, it contains oxygen as well. This mineral looks like salt that’s why it is named salt.

Whereas Himalayan rock salt, on the other hand, has sodium and chloride plus 82 other trace minerals, so we can say it is a salt (Himalayan salt); truly and scientifically. Now you must be thinking, what is the major difference between Epsom salt and Himalayan salt, and which one is a better choice for different purposes? Read along to know the answers to these questions.

There are many differences between Epsom salt and Himalayan salt. We will start with their origin and how they are obtained from their sources.

Epsom salt is a natural mineral first discovered in Epsom, Surrey which is a town located in England, in the 1800s. It is collected by boiling the mineral seawater from Epsom seashores with so much care to protect its crystalline form.

But these days due to the increased demand for Epsom salt, it is made by a chemical process. It is a compound of oxygen, magnesium, and sulfur and is chemically known as magnesium sulfate heptahydrate. So, by combining these three elements Epsom salt is made. As it is naturally obtained from the bitter saline spring of Epsom that is why it has a bitter taste. It has almost transparent crystals that resemble salt hence called Epsom salt.

On the other hand, Himalayan salt is mined with hands in the form of large rocks from the salt deposits situated in Pakistan. It is considered the purest salt found on earth because of its unadulterated and chemical-free nature. Its compact crystalline structure and wellness properties make it very useful.

It is chemically akin to table salt but with an extra touch of trace minerals. These minerals give this salt an attractive light to dark pink colour. This is the pure edible salt that is used for seasoning meals.

Let’s check out some main benefits of these two salts below and see which salt is better.

Uses Of The Epsom Salt

Can Epsom Salt Be Used Instead Of Himalayan Salt?

Epsom salt cannot be used as an edible salt but yes it can be taken as a medicine to treat constipation. Whereas, Himalayan pink salt is considered one of the best salts for human consumption.

Which Is The Better Option; Epsom Or Himalayan?

Is Table Salt As Good As Epsom Salt?

Epsom salt is a naturally occurring compound of magnesium and sulfate. Epsom salt is totally different from regular table salt and has a bitter taste that will make you feel like vomiting. So, for consumption table salt is better than Epsom salt but it cannot be used as a bath salt. Epsom salt is good for bathing.