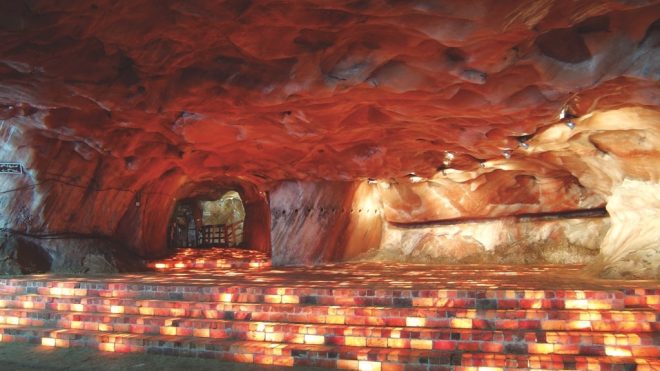 Khewra salt mine is located in Punjab, Pakistan. This salt mine can easily qualify for the list of the wonders of the world. Visiting this mine also known as khewra city is a treat for people who love to explore nature.

Currently, the Khewra salt mine happens to be the only salt mine where salt extraction is taking place.

A Quick Glance At History

Himalayan salt history is very rich. Remember Alexander the great ruler who is famous to have conquered half of the world? Well, supposedly he is the one behind the discovery of the Himalayan salt range in Pakistan.

It is said that around 326 B.C, Alexander was passing through this region and stopped by to take some rest. One of the soldiers noticed the troop’s horses were licking the rocks near the resting place. He tried it for himself and found the rocks to be salty. This is how Himalayan salt was discovered.

Over the years salt extraction and its uses have seen many changes and have been passed down from ruler to ruler.

The latest noticeable advancement in the method of salt extraction was made under British rule when a scientist devised the doom and pillar technique. This ensures the structure and stability of the salt mines are not compromised with hurdle less salt extraction.

One of the interesting facts is that the Himalayan mountain salt was used as currency in olden times.

There are two routes to reach this mountain of salt. A wise approach would be to use one route to get to the mines and the other one while heading back home. You can use the khewra salt mines map to get help.

The route via GT (grand trunk) road is slower but scenic.

The other route through Motorway M2 is safer and faster.

Since the Khewra salt mine happens to be a major tourist attraction hosting around 250,000 tourists each year, road signs leading the way to the mines are quite visible.

Facts About The Salt Mine In Figures

Salt range geology is a very vast subject. According to the figures, the Pink rock salt extracted from the Khewra salt mine contains 98% halite and is said to be as old as pre-Cambrian times.

The salt mine contains approximately 82 million metric tons of Himalayan rock salt out of which 0.35 million tons are extracted each year.

The salt mine has a total of 12 levels where extraction takes place out of which 6 are below the surface.

The tunnel in the Khewra salt mine alone is 40 km deep. There is however a small area specially designed for the tourists developed in 1914.

One of the most interesting things about the Khewra salt mine is it is home to a 6-bed hospital for people suffering from Asthma. People can spend 8-10 hours a day in the hospital while a 10-day stay there. This hospital is located at level 5.

There are 25-30 salt processing units near the salt mines. Usually, people who have areas of salt mines leased own these units. The pink Himalayan rock salt which is hand-mined is processed and sorted here.

Around 70 percent of the rock salt extracted goes to industrial use. The remaining 30 percent qualifies as edible.

Himalayan rock salt crystals come in different colors ranging from beet to subtle hues of orange to transparent. Pink rock salt is the one that makes it to the list of premium natural rock salt and fetches the highest price.

The temperature in Khewra salt mines remains constant at 18 degrees Celsius around the year.

A Sneak Peek Into The Khewra Salt Mine

The magnificent views waiting inside the Khewra salt mines are enough to attract visitors over and over again.

There is a single gauge electric train that tours the visitors inside the khewra mine. The train is old but works fine.

The salt mine has several saltwater pools that give off beautiful colors when projected with light. The view is jaw-dropping.

There is a tunnel inside the salt mine which is named the crystal valley. It has pink salt crystals on the roof and walls and they shine when light falls upon them.

Over the years a lot has been developed inside the Khewra salt mine to attract tourists visiting the site. There are replicas of Badshahi Masjid, The Great Wall of China, and a model of Mall road of Lahore and Minar-e-Pakistan. These replicated monuments are lit which gives out a beautiful warm glow.

The salt mine is home to a 75-meter tall assembly hall chamber with proper stairs that lead up the wall. It also has a 25-meter bridge called Pul-E-Saraat.

There are naturally occurring beautiful salt crystal formations. These are the results of stalactites and stalagmites.

Just in case you feel tired after a walk through the Khewra salts mine, you can take a rest at the restaurant and buy a rock salt lamp from the souvenir shop.

Last but not least, the khewra salt mine owns a running post office of its own. This post office is used by the workers working inside the mine.

There are currently 400 plus workers working inside the Khewra salt mine.

Pakistan rock salt has made its way into the medicine as well. Many studies have proved that Himalayan rock salt is extremely beneficial for different health problems.

The crystal rock lamp takes away the impurities from the air making it free from pollutants.

Natural rock salt contains 84 trace minerals that are vital for the functioning of the human body.

The khewra salt mines are a must-visit place in Pakistan.